Flight of the Puffin, by Ann Braden 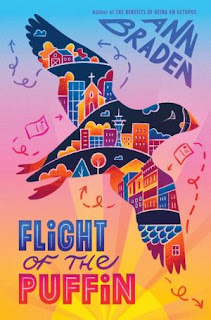 Four children (Libby, Vincent, "T", and Jack) struggle with being bullied and the feelings of powerlessness that come with being victimized.  Libby wants to be an artist, but her family does understanding anything except belittling others.  Vincent is a sensitive soul who loves puffins and triangles, and desperately doesn't want to get stuffed into another locker at school.  T lives on the street, trying to survive, and is afraid of calling home for help because of who he is.  Jack is a fighter who helps all of the kids at his small rural school.  So, when the school faces closure, he comes out swinging to save the place and only belatedly realizes that his actions are hurting people as well.  A pay-it-forward concept of giving strangers postcards with encouraging messages brings the four of them together and proves transformative for all.

The postcard idea (that everyone needs encouragement) is powerful and clever.  I'm sure some teacher will assign a project like it to students after they read the book.  I'm less comfortable with the idea that we should not judge others.  While most bullies have become the way they are because of how they themselves were treated, it's simplistic to imagine that you can break the cycle with kindness and understanding.  With much of the bullying in this book (Vincent being the notable exception) coming from adults against children, this is particularly disturbing.   It's an ambitious idea for a story, but I'm not altogether comfortable with the idea or its delivery.