How We Fall Apart, by Katie Zhao 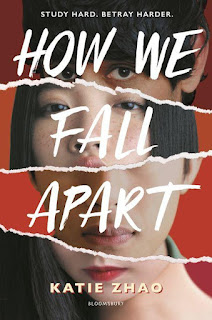 When the star of Sinclair Prep ends up dead, her competition are prime suspects.  Especially so when an anonymous person starts posting accusations against them -- accusations that turn out to be true.  Because the thing that all four suspects have in common is that they each have a dangerous secret.  One by one, their secrets are exposed, destroying each of their reputations (alongside their academic futures).  In the high stress academic rat race these students are in, any weakness is failure and so they must fight with the lives to protect themselves against the anonymous informant.  But will the final reveal prove the deadliest?

This murder mystery/gossip-girl elite high school mash up is all over the place in styles and story, but does a really interesting job dissecting the psychological costs of Asian over-achievement.  The way that each of these young people have sold their souls to achieve their parents' dreams in a futile attempt to earn familial love is a sad commentary.  As a serious subject, it would have made a pretty stunning YA drama.  Instead, Zhao has been seduced into creating a gossipy tale of (mostly) rich NYC prep kids.  The result is fluffy and hard to take seriously.  The implausibility of the plot and the various motives doesn't help.  The strength of the story should have been the characters but they are underdeveloped and we never get invested in them in the way we totally should.