Hunted by the Sky, by Tanaz Bhathena 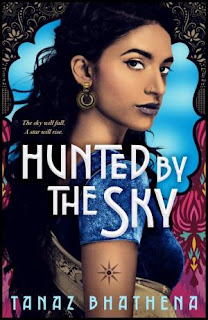 Gul's birthmark (a star) on her arm marks her as a threat.  A prophecy has foretold that a women with just such a birthmark will wield tremendous magic and be responsible for the death of the Raja and a revolution.  As a result, whenever a girl is found with such a birthmark, they are seized and never heard from again.  But Gul avoids capture when her parents sacrifice their lives to hide her.  Fleeing, she is taken in by a sisterhood of magician warriors who train her to defend herself.  But for Gul, defending her life really doesn't matter:  she has one goal and that is to kill the ruler to avenge the deaths of her parents.

Cavas is a poor boy living in the slums around the royal city.  He has no magic and no special powers, but he is determined to do whatever it takes to find enough money to buy the medicine that is keeping his sick father alive.  In the market, he randomly crosses paths with Gul.  But it is no coincidence and soon he finds himself helping her infiltrate the palace, where all is not quite as either of them expected.  The Raja's days are numbered, but Gul is little more than a puppet in the events that are unfolding.

Set in a fantasy world based on the Mughal empire, Bhathena has created a very dense and immersive setting for her story of magic and prophecy.  It's a complicated story and a very slow read.  That makes it hard to get into and at some point exhausting to track.  Some of the blame for this lies in the pacing, which ranges from glacial exposition to sudden plot twists and large chronological jumps.  Bhathena loves to tell us details about this universe and is constantly revealing new details. Maddeningly, large amounts of these details turn out to be inconsequential to the story.  While the sudden twists and jumps keeps us on our toes, it is tiring and frustrating.  Rather than good writing, it feels more like an author who cannot carry through on an idea.  A beautiful book, but average storytelling.