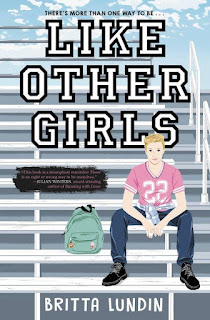 After getting kicked off the basketball team for fighting, Mara is given an ultimatum:  if she ever wants to play on the team again, she has to prove she can be a good team player in some other sport first.  In the Fall, that pretty much just leaves her with volleyball.  But Mara can't stand the volleyball.  It's not much of a sport and the girls actually wear makeup when they play!  While tossing a football after school, her best friend Quinn and her brother Noah jokingly suggest going out for football.  Despite the laughter, the idea doesn't sound half bad to Mara.

While no girl has ever played on the team, Mara knows what she is doing and, despite stubborn resistance from the coach and some of the other players, Mara shows that she's a fairly competent player.  With a lot of effort she earns a place and becomes grudgingly accepted as one of the guys.  But then four other girls announce they want to join the team.  Citing Mara as their inspiration, they don't have her skills but they are highly motivated to prove the point that girls can play.  While the boys accepted Mara, the publicity that having five female teammates brings stirs up resentments.  Mara herself is angry that her attempt to prove herself as a decent football player and a team player has been sidetracked by the other girls' political agenda.  She doesn't have anything to prove about being a girl player, she just loves football and wants to play.

However, as the girls struggle to be accepted, Mara comes to the realization that she was never "one of the boys" and that their fight is her fight as well.  Part of her growth is in accepting that she can be tough and a girl at the same time, that strength does not have to be a masculine.  The product of all this growth is a story that revels in good sports action, while taking a sophisticated look at gender roles and the maddeningly complex relationship that they have with society.  It's at times funny, almost always entertaining, and ultimately profound, defying YA stereotypes right and left about how "girly" girls and non-girly girls behave.