Many Points of Me, by Caroline Gertler 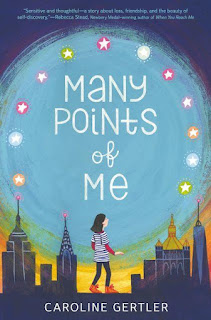 Being the daughter of a famous deceased artist can make for a lot of awkward conversations, but Georgia is used to the weird way people treat her when they find out who her father is.  What she has never grown comfortable with is how they speak of him in the present tense, as if he were still alive.  They are of course speaking of his art and its continued relevance and vitality, but that doesn't stop her from feeling strange about it.  And the way that everyone seems to want to own a piece of him makes her jealous and possessive.

There's a retrospective of her father's work being planned for the Met.  Her mother is knee deep in curating the exhibit and their apartment is filled with Dad's old sketches and drawings.  Helping her mother, Georgia comes across a sketch he made of her when she was ten years old and realizes that it might be a draft of his most famous work -- the one he never painted but planned to.  Stunned by the fact that her fathers "lost" masterpiece was going to be of her, she hides the sketch away, which sets off a chain of events that get Georgia into a world of trouble.

An art mystery that does a wonderful job of showing readers how to better appreciate art (the author's background as a docent at the Met certainly shows through!).  I'm not a big fan of Georgia's poor decisions and the more cringeworthy consequences of them, but the story itself is a lovely examination of Georgia's acceptance of her father's passing and her more reluctant embrace of his legacy.  By the end, Georgia achieves some level of peace with the idea that her relationship with him was unique and is untouched by the fact that he was a public figure.  I would not have thought that such a rarified existence as the daughter of a famous artist would create a character who was so relatable, but Georgia is an easy heroine with whom to empathize.