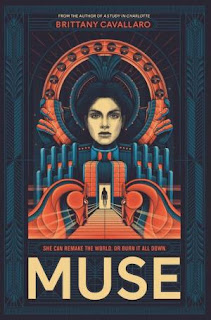 It's the end of the Nineteenth Century and the great inventor Tesla is about to demonstrate at the World's Fair the awesome force of electricity.  But that is about all that will seem familiar in this alt-history in which America became a monarchy divided into great territories, each administered by a governor.

In the grand city of Monticello-on-the-Lake (which we would think of as Chicago), the Fair is meant to be an opportunity for St Cloud (whose borders run from Canada down to the City of Orleans on the Gulf) to demonstrate their power of ingenuity and progress.  But sabre rattling and nativist rhetoric from their western neighbor Livingstone Monroe threatens the peace.

In the midst of this, Claire Emerson, the daughter of an unbalanced inventor, is plotting her escape from her father's dominion.  She dreams of a chance to strike out on her own and be her own woman, but the reality is the best for which she can hope is escaping her father by subjecting herself to a husband.  At first, the plan is for her to flee across the border in the midst of the Fair, but when St. Cloud is invaded, Claire finds her fate entwined with that of the young governor Remy Duchamp.  And while the conflict is ostensibly against Livingstone Monroe, the Daughters of the American Crown have insinuating themselves into the mix in an attempt to bring a woman into power.  Claire's instincts are to assist this feminist enterprise, but the DAC's anti-immigrant stance alienates her.  With no clear support, Claire makes do as best as she can, forming alliances that are both grandly political and personal at the same time, siding with Remy while simultaneously trying to claim power for herself.

As with any complex story, keeping track of all of the characters is challenging.  Some are definitely more memorable than others.  Her BFF Beatrix is a highlight -- providing useful gadgets and escape routes, as well comic relief.  Others, like Margarete (Claire's adopted sister and chambermaid) are underutilized in this book but may become more useful in the second half.  The boy Remy is fairly forgettable and while important to the story is fairly easy to ignore.  As for who is on whose side, forget about it!  Allegiances are fluid and the frequency of betrayals and double-crosses make tracking teams pretty futile.

The novel is sprawling and complex, with numerous competing plots and subplots. This first installment (of a duology) is naturally more expository, but you'll probably have to re-read it to refresh your memory whenever the second half comes out.  I hope she can manage to pull it all together!  Confusing and dense, but lively, original, and highly entertaining.