The Girl from Shadow Springs, by Ellie Cypher 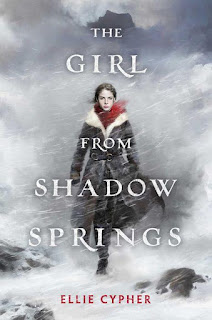 Living on the edge of the Flats, Ellie knows that there are only two types of people who venture out on that frozen wasteland:  the desperate and the foolish.  She should know:  she supplements what she and her sister Bren have by scavenging off the frozen corpses she finds out there.

It is the remains of a particularly fine looking gentleman that brings her trouble.  No sooner has she discovered the body than another man shows up and demands that she turn over what she found.  When he doesn't find what he's looking for, he kidnaps Bren to ransom for what he is looking for.  With little in the way of resources (and no idea what the man wanted in the first place), Ellie sets out on to the Flats to recover her sister.  Along the way picking up the nephew of the dead man, the two of them face brutal weather, wild animals, thin ice, hostile human gangs, and a supernatural being who is at the root of the inhospitable conditions in which they live.

Rich in detail, the novel lovingly creates its Western-meets-Ice Age world, but gets bogged down by its stylization.

To feed the ambiance (and give the author a chance to have Ellie spout lots of tough posturing) Ellie's narration is full of lots of ungrammatical phrasing.  This provides some flavor but becomes distracting as the usage is inconsistent.  And it doesn't help that the text itself is marred by typos.

More annoying to me were the numerous scenes that were elongated by having the characters interrupt each other.  The device serves mostly to drag out the action and makes little sense in a life-or-death scene as they argue with each other instead of the fighting/running/shutting up they need to be doing.

Finally, numerous actions scenes seem to be inserted into the story simply to pad the novel, adding nothing to the story itself except to give Ellie another chance to tell us that the situation is impossible but that  she'll bravely forge ahead.  The fact that she manages through each and every one of these situations leaves one skeptical of her ability to accurately evaluate plausibility.  Such set-ups don't build suspense, they simply annoy the reader.

Beautiful writing, but repetitive and drawn out.