The Princess Dolls, by Ellen Schwartz 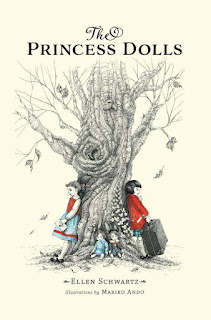 Esther and Michi love to pretend that they are the Royal Princesses Elizabeth and Margaret, having adventures in Buckingham Palace and riding their horses.  One day, they see a beautiful pair of dolls in the local toy store window: replicas of Elizabeth and Margaret.  More than anything, the two girls want the dolls, but they are very expensive.  T

The good news is that they share the same birthday and it is arriving soon.  Wouldn't it be wonderful if they each got one of the dolls on their shared birthday?  When the day arrives, Esther gets the Elizabeth doll, but Michi does not get Margaret.  In the commotion and attention that Esther receives from the other girls, she neglects her friend and Michi slips away, feeling hurt and betrayed.

It's 1942 and while the war rages far away from their home in Vancouver, it still impacts the children.  Esther has an aunt and uncle who are trying to flee from Germany and her parents are anxious that they cannot find out anything about them.  Michi's danger lies nearer, when the government announces that all persons of Japanese descent on the Pacific Coast are being relocated.  Her family is forced to pack up and leave.  Before Michi leaves, Esther tries to reconcile with her, but it never happens.  Afterwards, Esther tries to figure out a way to make all of these wrong things right.

A sweet chapter book with beautiful illustrations and stellar design.  I didn't know that the Canadian government also interned their Japanese citizens, so this was an interesting subject.  But moreover, this is a nice story of friendships that get tried and tested.  The world events around them may be more significant, but for these two girls, losing each other's trust is far more important.