The Quantum Weirdness of the Almost-Kiss, by Amy Noelle Parks 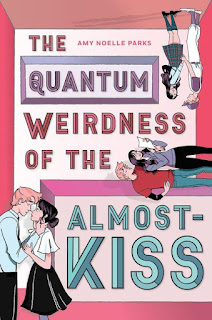 Caleb and Evie have been friends since they were little, but they have never kissed.  Not that Caleb hasn't tried!  In fourteen attempts, Evie has always turned him down.  He's been OK with that since she has turned down everyone else as well, but when she starts dating Leo in their senior year, Caleb isn't happy about the situation.  It's not like he hasn't dated other girls in the meantime, but with the shoe on the other foot, Caleb feels hurt.

With just about everyone in the story (except Evie) knowing that she should be with Caleb, no one else is happy about it either.  What makes this well-trodden romantic path actually work in this case is how razor smart these kids are.  Everyone knows and everyone says so, so there's no mystery that Evie and Caleb are going to be together in the end.  Evie just needs to get over her fear of getting into a relationship with her best friend.

The best part of the story is actually Evie's growth as a person, which comes out in her quest (with Caleb's help) to win a prestigious national math award.  She's bright, intelligent, and articulate, but she suffers from anxiety attacks (to some extent fed by her mother's overprotectiveness).  To get over her fears, she has relied in the past on a support network made up of Caleb and her BFF Bex.  A good part of the novel then is her working through that and learning to do things on her own.  It's a very satisfying story of growth in itself, but this thread of the plot also reveals many disturbing issues that never really get addressed properly:  the sexism present in the mathematics community, Evie's difficult with dealing with her fear of being judged by others, and Caleb's unhealthy possessiveness of Evie.

Caleb and Evie have a fairly disturbing dynamic.  Evie needs Caleb to control her anxiety and Caleb needs Evie to "protect." This unhealthy codependency presages some pretty dysfunctional behaviors in their "happily ever after" romance and casts a shadow over the romance itself.  Add to this Caleb's nasty violent streak.  On several instances, he either commits acts of violence or threatens to do so in the course of "defending" Evie.  In a climactic moment, Evie preempts Caleb's anger and settles her own scores, but at no point does she (or anyone else) address Caleb's behavior.

All of that aside (and the book downplays this darker side so it is possible to do so), it's nice to find a book about science-savvy teens who are well-rounded and not geeks.  Caleb plays baseball, Evie's boyfriend and her friend Bex play soccer, and even Evie herself enjoys Yoga.  They make wisecracks about the humanities, but they are literate and articulate and do well in English class.  Evie's anxiety issues aside, they all have active social lives.  Smart kids in a smart story makes for some smart reading.  This is a good read that treats its young adults as intelligent people with nuanced lives.