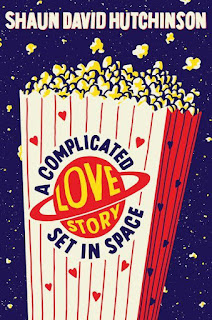 This space satire opens with Noa finding himself outside of a spaceship with no memory of how he got there.  Inside the ship, a stranger named DJ is trying to keep the ship from exploding.  Together, the two boys manage to figure out the immediate issue.  Saving the ship and their lives doesn't bring them any closer to solving the mystery.  On the contrary, the story keeps getting more and more complicated.  Joined soon by girl named Jenny, the three young people battle stowaways, overheating reactors, space monsters, and eventually the most perverse high school in the universe.  And through it all, Noa and DJ develop a romance whose most surprising element is a sense of deja vu.

Much like Red Dwarf (if Lister and Cat were in fact gay -- in other words, just like Red Dwarf!), this is science fiction that doesn't take itself too seriously.  In fact, the story only starts to flag as Hutchinson seeks to find a way to end the story, explain the mystery, and say something deep and meaningful about mass culture.  The metanarrative of using sci-fi tropes to comment upon commercialization didn't work for me, but up to that moment, this is a pretty hilarious and entertaining read.  Noa and DJ make a great romantic couple and their relationship has a lively sparring that keeps things interesting (although I felt bad for how underutilized Jenny is as the third wheel).  Quirky and disruptive this is a story that works best as satire and shuns deep thinking.