A Night Twice as Long, by Andrew Simonet 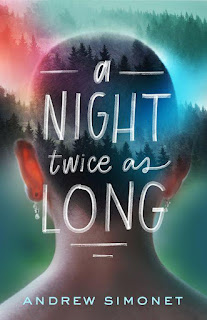 A blackout that stretches out over several weeks provides an unusual setting for this unconventional road trip story.

Before the lights went out, things were already going pretty badly for Alex.  Her father has abandoned the family.  Her severely autistic brother, Georgie had been removed to foster care.  Her mother had surrendered to depression.  But a world with no electricity seems to Alex like an opportunity to reset and fix things. She kicks things off by shaving off her hair.

Meanwhile, her neighbor and best friend Anthony has heard a rumor that some guys at the VFW a few towns over have a shortwave radio and can use it to communicate with the outside world.  He wants to go and see if he can contact his mother who is currently stationed overseas.  Alex agrees to go with him and the two teens set out on foot.  The trip is supposed to take just a few hours, but becomes an overnight adventure, during which the kids find out that the loss of electricity has brought out the weird in people.  From nudists to schools without walls to Christian survivalists, Alex and Anthony (along with Georgie who they pick up along the way) find that, in a world without lights, so many hard things seem possible.

Misclassified as YA, this is really an adult book with teenage characters.  It has some powerful observations about race (Anthony is black), class (they are both poor), and developmental disability.  Simonet is particularly eloquent on the latter subject letting Alex rant profusely about the awkward way that people treat autism and families with autistic members.  While autistic characters like Georgie are no longer exceptional in YA, the subject of their families is rare in any genre so that makes this novel stand out.  But beyond this, Simonet does not offer much for the story.  The blackout is more background than focus (so no post-apocalyptic moments of note) and is more of an excuse to give the kids a reason for their two-day hike.  I liked the characters, finding them firm, resourceful, and yet flawed, but there isn't much for them to do here.  I think there was room here to take all of these nice observations about humanity and also fit in a real adventure.