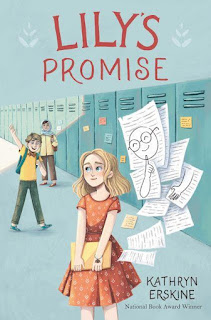 Lily's been homeschooled for the first five years of her education, but after her father passes away, there's no one to do the teaching and Mom insists that she start attending regular school for sixth grade.  While Lily expects changes, the one things she dreads the most is making friends and speaking in public.

Before her father died, he made her promise that she would "strive for five" and do five things that scared her and she figures to putting herself out there will be worst. She is surprised to find how easy the friend-making is as long as you approach people with an open mind.  She quickly makes friends with Hobart, a curling fan and the target of abuse from the class's bully Ryan.  Ryan has lots of targets, amongst them Dunya, a recently arrived Iraqi refugee.  Lily likes Dunya and is surprised by all the people (including Hobart's father) who dislike Dunya simply because of where she came from.

What Lily is coming to realize is that it is not enough to be kind, one must also be brave enough to confront hatred.  A chance comes for Lily to commit a truly powerful act:  run for class president.  She's terrified of speaking in public, but the alternative is Ryan.  He's set up a campaign based on lies, false promises, and smear campaigns (in a not-so-subtle allusion to recent national politics).  Lily puts herself in contrast by running a positive.  With the help of Hobart and Dunya, she sets her sights on fulfilling her promise to her father.

Cleverly albeit jarringly, the novel also contains a Greek Chorus in the form of the book itself.  Alternate chapters break from the action to allow "Libro" to discuss the preceding events and comment on the author's choices.  Some of the observations are quite amusing (like when Libro tries to rally the reader to prevent the author from allowing a dog to come to harm), but the constant interruptions disrupt the flow of the story and grow didactic when the author feels that a point hasn't been driven home hard enough.

While I appreciate the urgency that Erskine must have felt in creating this political work at the time, it hasn't aged well and the sentiments are saccharine.  It also comes at some cost to the original point of the story.  For while the arguments for kindness and positivity are pretty thoroughly presented, Lily's journey in developing self-confidence is forced to the background.  The expected pay-off doesn't even occur as the book ends abruptly.