Our Year of Maybe, by Rachel Lynn Solomon 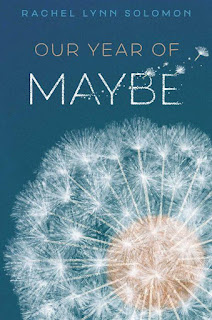 Sophie and Peter have been friends from childhood, but there has always been an imbalance in their relationship.  Peter is sickly, suffering from kidney dysfunction, and Sophie has always felt the need to sacrifice her happiness for him and to give him whatever he wants.  When she turns 18, that means donating a kidney to him.  She's a match and she can't think of anything she wouldn't want more to do than see Peter be healthy.  Her family and friends advise it, but she is adamant.

After the transplant, however, things go awry.  Sophie is distressed to find Peter is drifting away from her.  She thought that the experience would cement their relationship together, but instead her healthy Peter is gaining his independence.  Sophie, who has always defined herself in relation to him, doesn't want to lose him and doesn't even know how to move on.

Well-written, but excruciating to read.  Simply put, the characters are not very likeable.  Both of them self-centered, but it is Sophie's sense of entitlement that comes across the worst.  Despite her protestations that being a donor merits her to nothing, it is obvious that she feels nonetheless that Peter is hers and that he owes her his life in exchange for her loyalty to him. Peter, in contrast, is mostly oblivious to this and ultimately clueless (although at some points in the book, it seems that he knowingly exploits Sophie's dependence for his own benefit).  These are not people, in other words, who respect each other as people or who can get beyond their sense of what the other one owes them.

The story has many distractions. Sophie's younger sister is an unwed mother, which might have been useful as a contrasting relationship, but it is largely unexploited.  But the bigger non-sequitur is Sophie's and Peter's separate awakening sense of Jewishness.  I wasn't really sure where we were going with this, but I was hoping it would either become a path that one or both of them could follow as a way of breaking their codependence (Peter briefly flirts with the idea of going on a Birthright trip to Israel to give him some distance from Sophie) or that they could use as a way to guide them through their issues.  But instead, we get a couple of conversations and a random visit to temple for what are otherwise a pair of self-described "High Holiday Jews."

Finally, there is the way it all ends up.  I won't talk much about that because I don't want to spoil the ending, but the fact that the end of relationship (and the book) is blamed on a specific "heartbreaking night" (as the blurb puts it) really cheapens the over-350 pages of dysfunction that we have witnessed along the way.  This is a relationship that was destined to combust without an impetuous mistake.

In sum, a great story of two people in a relationship that you would never want to be in.  Whether you want to read about it is up to you!