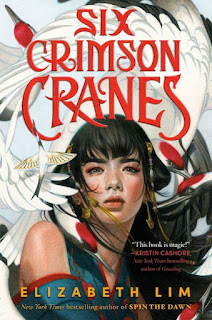 Shiori, princess of Kiata, has been betrothed to a minor noble from the far cold north.  Even her six brothers agree that it seems like a demotion.  She'll do anything to duck out of it -- even taking a dangerous splash into the ocean to avoid the betrothal ceremony.  But when that runabout exposes Shiori's unusual magical acumen, it becomes a greater threat than an unwelcome union.  Magic is forbidden in Kiata and (until now) Shiori has been able to hide her abilities.

When she first arrived, Shiori loved her stepmother.  The brothers were cooler, but Shiori latched on to her, pining as she did for her deceased mother.  But as they all grew older, the positions flipped and a distrust developed between Shiori and her stepmother just as her brothers started to like her.  When the ocean incident brings Shiori's powers to her stepmother's attention, Shiori realizes too late that her stepmother is herself a sorceress and a threat.  Shiori tries to warn the family, but the woman curses her and her brothers.  Her brothers are transformed into six cranes and forced to flee while Shiori is banished to a faraway island, affixed with a wooden bowl over her head, and threatened to never speak.  For every word she speaks, she is told, one of her brothers will die.

Transported to a strange land with nothing except her clothes, Shiori must find a way to survive, reunite with her brothers, and figure out how to break her stepmother's curse.  Doing so will involve skills and fortitude that she never knew before that she possessed and enlisting the support of a wide variety of resources, including the help of her despised suitor.

This rich and vivid fantasy with a mildly Asian flavor features a complicated story with nearly constant and relentless action.  Full of betrayals and broken promises, the story has a fair share of twists and turns.  It contains a lot of what I'll call "false leads" (i.e., plot points which seem to suggest certain events that turn out to never materialize).  The old chestnut that if a gun appears in Act 1 that it will be used in Act 3 does not apply here.  Instead, Lim seems to delight in setting up a situation and then suddenly switching directions.  For example, given the way the story began, I presumed that we would have a big final show down with the stepmother about fifty pages before the end, Shiori would be victorious, and things would wrap.  I won't give any spoilers beyond simply saying that it doesn't happen (and not simply because there's a second book coming out).  The novel is chock full of these false leads:  lengthy preparations for conflicts that never materialize.  That doesn't mean that the book is particularly original, but simply that Lim doesn't want you to be able to guess what is going to happen next.

What is more predictable is the way that Shiori develops as a character.  She starts spoiled, self-absorbed, and impulsive.  Through her curse, she learns humility and circumspection.  With her struggles, she develops interpersonal skills and leadership.  Finally, with her betrothed, she learns to love.  None of this is dwelled upon but instead comes out organically as a result of all of the action, creating an appealing protagonist and a coming-of-age story that is a pleasure to read.