Small Favors, by Erin A. Craig 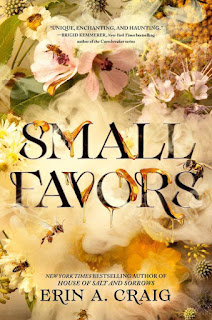 At eighteen, Ellerie is on the verge, but her future is not yet clear.  Unlike her twin brother Sam who will inherit the farm and have a place in the leadership of their small isolated town of Amity Falls, Ellerie's future will be tied to whatever man she ends up marrying.  It seems terribly unfair when Ellerie is the one who is loyal to her family, dutiful on the farm, and doting on the family's bee hives.  But Amity Falls is a community built around rules, order, and custom -- notions that have brought peace and modest prosperity to the townspeople.

When the incidents start to occur (animal attacks in the woods, strange mutations, withered crops, fires, and random acts of vandalism), it seems really like a string of bad luck.  But everyone's a little suspicious.  Tongues, primed by suppressed jealousy and resentment, far too easily spout forth accusations.  And those accusations in turn spawn counter-claims, petty vengeance, and violence.  The rules that seemed to bring order to the town, have simply hidden the true feelings of its inhabitants.  Let loose, the rage and fury tears the town apart.

And on the sidelines, a malevolent dark force is watching and entertained.

A creepy and deeply immersive horror set in a small isolated community, roughly in the late nineteenth century.  If your thing is supernatural horror, this novel provides it in spades.  While it is pretty easy to figure out that something is going on, the reader is left guessing at just how widespread the problem is until nearly the end.  And so while we are not entirely surprised by the reveal, its scope is shocking.

What really powers the story is not the sporadic acts of horror, but the complex web of combustible relationships that Craig has built.  Almost everyone has some reason to distrust everyone else.  Manipulated by evil forces that the townspeople never quite fathom, those doubts and insecurities are easy picking.  The result is a sobering story about the corrosive effects of distrust (made all the more chilling by the townspeople's own creed of unity-at-all-costs).  While the story ends on a note of hope, the overall Hobbesian message is a downer.

Beautifully written, finely nuanced, and deep thinking, Small Favors is book that will haunt you.