The Cold Is in Her Bones, by Peternelle van Arsdale 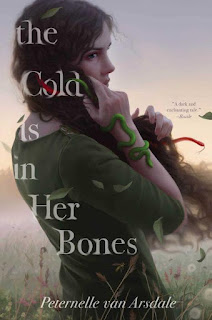 Milla has never left her family farm.  Her parents won't allow it.  They also require her to line every entrance and window sill with salt to keep away the demons.  As long as Milla is dutiful and obedient, they tell her, she will be safe.  But from what?  When her brother's fiancée Iris comes to live with them, Milla hopes for answers.  But Iris brings only scary fairy tales and vague warnings about what happens to girls who become cursed.  And then when Iris herself becomes possessed by the demon and is sent away, Milla discovers the truth about what happens to girls who fall under the thrall of evil.

The Cold Is in Her Bones is a story of evil legacies, family secrets, and communities far too eager to sacrifice their young women rather than undo a wrong committed long ago.  It is an ambitious story, but hard to follow.  While the prose can be quite beautiful, it was frustrating to track the action or why exactly we were taking the turns we did.  In the end it is near impossible to explain what the story was really about or whether it was truly resolved.

The cover is pretty though!