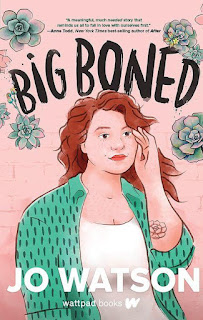 Lori defines herself through the way she thinks people see her:  as a large overweight young woman.  Certainly not as anyone attractive, let alone beautiful.  However, at her art high school in Johannesburg, she has made friends and come mostly to terms with a traumatic assault she endured a few years before.

When Lori's autistic brother needs to move to a new school, it's exactly what her mother needs as well:  leaving Joburg and moving to Cape Town and starting again. There, Mom buries herself in her new career, generally ignoring them and leaving Lori with the responsibility of taking care of her brother.  While Lori is happy that her brother is getting the help he needs, Cape Town's sporty vibe is not for her.  Her new high school is all about water sports and Lori can't stand athletics and fears the water.  But some of that could change thanks to Jake, a friendly water polo captain.  He would normally be out of her league, but his attention-deficit younger sister attends the same school as Lori's brother and the younger siblings have become fast friends.  It doesn't take long, to Lori's surprise, before genuine sparks ignite between her and Jake as well.

With some support from Jake, another girl in Lori's class who aspires to design clothing for plus-size women, and a witty counselor, Lori learns how to deal with her fears, embrace her aspirations, and confront her mother.  Along the way, she discovers an aptitude for street art. The result is a winning story about believing in yourself and overcoming your fears.

Jo Watson is a revelation.  While covering familiar ground and all the usual scenes (the mirror, dress shopping, binging, and bullying) that one would expect in a story about a full-bodied young woman, Watson quickly leaves that behind and shows Lori really grabbing on to self-improvement.  She has her insecurities, but they really don't stop her from trying (and succeeding!) in shedding them. All of this success can make the novel seem unrealistically rosy (so much so that the protagonist even complains at one point that things like this don't happen "unless we're in the pages of some unrealistic YA book that totally throws social conventions out the window and sets itself in this totally made-up world where fat girls win and the guy looks past all her cellulite and sees the girl inside"). Yes, Lori, that's basically what this story is...and it's a winner!

As an aside, I don't believe that I have ever read a YA novel by a South African writer.  The different settings were a mildly disorienting, but pleasant change.  For while I've visited SA, I tend to see it only through a political lens.  I'm happy to report that angst-ridden adolescence is pretty much the same (if not better) there!