Denis Ever After, by Tony Abbott 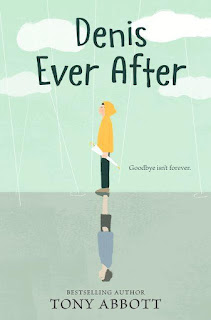 Like most people who have died, Denis doesn't remember the particulars of what took his life away five years ago, but he's at peace with it and ready to let go and move on.  But his still-living twin brother Matt can't let go of him.  And as long as Matt refuses to let go, Denis is stuck in Port Haven (a waiting area for recently-departed souls).  There's only one thing to do about it, Denis must return to the living world and convince his brother to let go.

While the case was never resolved, Denis was murdered and Matt wants to know who did it and why.  The two boys tackle the mystery using clues dug up by Matt and his friend Trey.  Denis who initially can't recall anything, finds his memory being jarred loose by revisiting the scenes of the crime and the mystery gradually is resolved.  However, time is running out.  With every visit he makes to his brother, Denis is putting his own soul in jeopardy.

Denis is no Patrick Swayze and Matt is no Demi Moore, but you know this story well enough.  I didn't always follow the plot developments, but the mystery unfolds at a nice pace keeping us wondering until the end what really happened to Denis.  I personally didn't find the story all that compelling.  The boys are pretty whiney and their parents are grating and annoying.