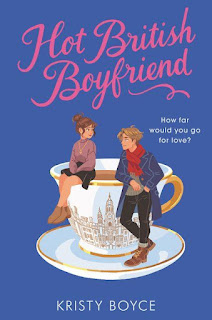 Ellie's habit of following her impulses gets her in trouble and leads to public humiliation when she throws herself at a boy at school, only to find out that he likes her best friend instead.  Needing to escape, she signs up for a high school study abroad program in England.  Armed with her Jane Austen novels, she's determined to meet a cute British guy and forget all about what's-his-name back home.

While the academics are far more rigorous than she's prepared for, she seems to get her wish pretty quickly when she meets Will at a flea market.  He's not only gorgeous but also insanely rich, shuttling her around in his Jaguar and taking her out for fancy dinners at posh places.  But Ellie is never quite comfortable in his presence.  He's so much better than she is and she expends all of her energy trying to impress him and prove herself worthy.

All the time she is trying to impress Will, she is missing out on her friends, her chances to get to know England, and the things that are really important to her.   And, in that pesky way that romances do, there's a sweet quiet boy in their group that Ellie can't quite seem to forget.  Dev is understanding, patient, and supportive.  And while he isn't British, maybe she needs to stop and think about what she really wants in the boyfriend?

No surprises and none expected, but I found this romance a bit more cringeworthy than normal.  Ellie comes across as shallow, throwing away her unique opportunity to study in England in the name of chasing a boy (a boy who doesn't even come across as worth it).  It's easy enough to toss Will aside in the end because the relationship between Ellie and Will seems so superficial.  While it is fine to hate the bad choice and be rooting for the good one, I found myself actually hoping that poor Dev would wake up and realize that Ellie herself wasn't that much of a prize.  All of which begs the question:  if you don't like the protagonist, how exciting can the romance actually be?