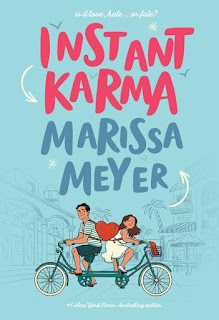 Prudence has always believed that hard work should earn a person success.  So, when her biology teacher gives her a poor grade for a project that she slaved away on, she's incensed.  But when she learns that her "partner" (a lazy slacker named Quint who couldn't even be bothered to show up to class on time, let alone help her) is getting a better grade than she did, she's determined that there's something wrong in the universe.  There must be some sort of karmic pay-off for all of her effort.

Her teacher explains that she lost points for not collaborating with her partner and that, in order to raise the grade, she'll have to re-do the work but this time with Quint's involvement.  Reeling from the injustice of the situation, Prudence is nonetheless committed to doing whatever it takes.

Parallel with class project do-over, Prudence suffers a mishap during a local karaoke contest that suddenly gives her the power to cause karmic payouts.  When she witnesses an injustice, she can right it in a particularly appropriate and poetic manner, causing good things to happen to good people and bad things to bad ones.  It would seem that some force has granted her the ability to finally mete out the justice she wants.  However, strangely, it doesn't work on Quint.

Forced to work together, Prudence finds out that Quint is different than she thought.  He works at an animal rescue that is down on its luck.  Prudence, who has never met a problem she didn't want to fix, sees potential for helping the place back on its feet.  Before she realizes it, she's committed to working with Quint to save the center and she's falling head over heels for Quint.  In typical romance fashion, he turns out to have charms that might even tame Prudence's obsessions.

Two separate ideas, which interrelate throughout the story, make it hard to explain the purpose of the story.  The rescue center is a more typical YA romance setting -- struggling business gets bailed out by a clever girl and an admiring conveniently-single boy.  The supernatural ability to impose karmic payback is different and more about learning to be a better person and less judgmental of others.  It would have made a decent novel by itself, but together, the story heads in two different directions and never really arrives.