Not Here to Be Liked, by Michelle Quach 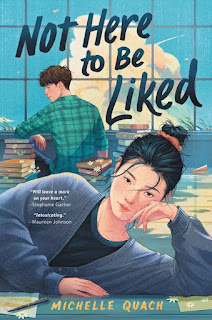 Eliza Quan is certain that she will be the school newspaper's editor in chief next year.  She's been working up to the position throughout high school and there really is no competition.  Sure, she can be a bit tough on the writers, but she knows what she is doing and she gets the job done.  However, at the last minute, Len (a junior reporter and popular jock) throws his hat in the ring and wins.  Shocked and hurt by the rejection, Eliza writes a private diatribe accusing the staff of choosing Len because he is guy.  A few days later, she is surprised to find her writing has been published.

Embarrassed to have the essay in circulation, Eliza tries to withdraw it but it has a life of its own.  What she has written about the preference for putting boys in positions of power resonates with many of the students.  The incident propels the issue of sexism in high school politics into the forefront and the school breaks into factions.  One side demands that Len resign and that Eliza be instated as the editor.  Others mock this as out-of-control woke culture.  Complicating matters, Eliza and Len discover a mutual attraction, which they try to keep private to avoid confusing the issue.

Entertaining and at times superficial, the novel actually brings up a lot of powerful questions about sexual equality in our relatively more complicated contemporary political landscape.  For an older reader, it is fascinating how sophisticated the dialog has become.  And while it is tempting to write  off some of the complexity of the dialog as being out of character for young people, I suspect that that is just me being an old guy not giving the kids their due.  High schoolers are now savvy enough to have discussions and debates like this.  Popular culture has pretty much ensured it.  There are two issues at play here -- the relatively easy question of the double standards that girls and boys are subjected to in high school and the more fascinating intersection of romance and sexual equality (and whether "sleeping with the patriarchy" undermines being a feminist).

While there are a certain number of side characters, I felt all of the major players were used effectively.  Eliza and her friends (Winona and Serena) bring different perspectives to their notions of feminism and what the role of women should be that prove quite provocative.  A brief cameo with Eliza's mother discussing her notions of the proper role of women in the family provides some lovely insight on generational differences (and undermines some stereotypes about Asian women).

Quach's book is ripe for discussion. This is first and foremost a romance and not a political novel, but I think it is okay to be both entertainment and edification.  Quach does not uncover anything particularly new, but the novel manages to highlight a variety of interesting thoughts that are worthy of group exploration.  I don't know if young people actually discuss books they have read, but if they do, this would be fun to talk about (and I would enjoy being a fly on the wall of that chat).