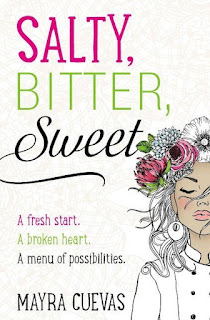 Still reeling from the recent death of her grandmother and her father's decision to start a new family, Isa is looking for a direction in her life. Thanks to her grandmother, she has always loved food. Winning a coveted place in an elite training program in a Michelin-starred chef's kitchen seems like just the ticket for Isa. She is prepared to throw herself into it, even though it means that she'll be living uncomfortably in the house of her father and his new wife (with baby coming).

That dedication to her craft is precisely what drives her crazy about lackadaisical (but infuriatingly attractive) Diego.  He's lazy and carefree, with no serious ambitions of his own.  Worse, he's staying at the house as he's the stepson of her stepmother.  Managing the intensity of her culinary program and keeping Diego out of her hair and her heart is enough to drive her crazy. But, of course, opposites attract.

As she warms to Diego and appreciates his more relaxed approach to life, she also discovers that maybe studying to become a master chef isn't what she wants after all.  If only her grandmother was still alive to offer her guidance.  All she has of her is her grandmother's cookbook, which she can't bring herself to open and read.

An engrossing story of fine food, dedicated culinary arts, and a general sense of how dysfunctional world culinary fame can actually be. Lot of details for dedicated foodies and enough fun stuff to keep even us amateurs enraptured and hungry.  However, I have a bone to pick about Isa's taste in guys.  I found Diego really hard to take at first.  I get that we're supposed to root for him and see Isa as unbalanced and uptight, but I couldn't get past how inconsiderate he was about the things that mattered to Isa.  It's only fairly late in the book that Isa starts coming around to the notion that she herself might be a bit too high strung.  At that point, Diego's arrogance starts to look a bit more like care and concern, but that doesn't change the way he fails to respect the things that are important to Isa. That she finds her true calling at the end is small comfort since it seems to require that Diego be part of the package.