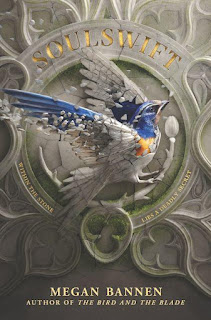 When she was a child, Gelya was taken from her village in the north by the Goodson and brought to the Convent of Saint Vinnica to serve as a Vessel of the Father and sing His sacred songs. There, she also helps translate the sacred songs into Kantari, the language of the infidels to the south -- a place that fascinates her because of the inhabitants' belief that the demoness that the Father imprisoned hundreds of years ago was actually a Goddess.

That conflict of belief has led to war and, at a hastily called summit hosted at the Convent, ambassadors meet to try to sort out the situation.  With her language skills, Gelya is brought in to translate for the interrogation of a young Kantari assassin.  The interview has only just begun when the proceedings are interrupted by a betrayal and massacre of the delegates.  Fleeing for their lives, Gelya and the Kantari (whose name is Tavik) find themselves unlikely partners.

That's when things start to get complicated. Tavik's mission is to free the Goddess (who he has found is imprisoned on the Convent's grounds), but doing so has unforeseen consequences and Gelya's body becomes possessed by the spirit.  Burdened now with carrying a presence that her faith has taught her is ultimate evil (but who Tavik venerates as a divine being), both of them must avoid capture.  They ostensibly share the same goal (free the being that Gelya is carrying within her) but with different motivations.  Along the way, their diametrically opposed worldviews coalesce through a shared struggle.  Mortal enemies become friends, lovers, and something a bit more transcendental.

A rich immersive fantasy with strong characters with interesting motivations and back story.  Both Gelya and Tavik are orphans of conflict and we spend some time getting to know how this affected them.  And while it is inevitable in a story like this that their initial distrust will break down through shared conflict to a romance, Bannen never lets that distrust too far out of their sight.  This is a fragile relationship and constantly under challenge as neither of the young people have much reason to believe the other.  As orphans, there's also a hypersensitivity to abandonment in their interactions that is particularly heartbreaking.

The world building is exquisite as the beautiful cover.  A wide variety of plausible cultures are presented and depicted.  The book makes good use of that diversity and also of different languages spoken by its people (although there is a fair amount of contemporary vernacular that can be jarring ("ass kicking," etc.).  The action gets a bit gory and the author is awfully fond of bad smells, but the story flows wonderfully and holds up the reader's interest through all 460 pages.

While themes of climate change and gender roles are present, it is religion and systems of faith that really predominate in this story.  I really liked the religious elements of the story, which are carefully thought out. Faith plays such a small part in most mainstream YA literature and the deep religious roots of the characters (particularly because they are so opposite of each other) allow some exploration of where beliefs come from and how we learn to coexist with people from different traditions.