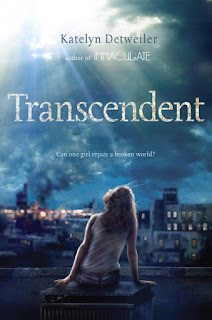 Sequel to the novel Immaculate, in which normal teenager Mina became the center of controversy when she has an immaculate conception.  At the end of Immaculate, Mina faked a miscarriage and fled into obscurity.  This story picks up eighteen years later when a terrorist attack at Disney World has left over ten thousand people dead and many more of them injured.

Reeling from the trauma of the event, people are desperate to find meaning in the loss.  A father of one of the victims tracks down Mina and her now grown daughter Iris.  Believing that Iris is a Messiah, he insists that she has to cure his dying daughter.  And when she refuses, he outs her to the public. The ensuing media storm as fanatics on both sides come out of the woodwork.  Believers want and demand her help.  Refusing to believe her protests that she is nothing special, they respond violently to her refusals to help and then just as badly to her failures.  Meanwhile, others claim she is a fraud and want to punish her.

Frightened by this mixture of adoration and hatred, Iris runs away, trying to sort out what she should do.  She finds unlikely help in the guise of Zane, a boy at school with a troubled background.  After much deliberation, she figures out her path forward.

Put a strong stress on that "after much deliberation." The book starts off strong as it unveils a turbulent America that is well-primed for a savior.  Iris's reluctance to take on that role (especially with the threatening behavior of those who would follow her) is understandable, but Detweiler doesn't seem to know where to go with this.  Instead, the book drags down as Iris waffles back and forth, ignoring advice and generally repeating herself.  By the end, even the solution seems weak.

In sum, a promising premise but one which the author doesn't really seem to know how to resolve.  And certainly not needing 400+ pages to resolve.