Apple in the Middle, by Dawn Quigly 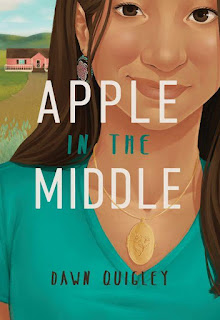 Apple feels like she is always between one thing or another, but never quite belongs to a particular identity.  Her family is rich, but she attends public school.  Her mother, who died giving birth, was Native American, but her father is white.  Her father remarried and she's been raised by her stepmother for most of her life, so she really doesn't know her mother's heritage.  As far as the white kids are concerned, her dark skin tags her as not one of them and for the Indians, her name is a joke ("apple" is a derogatory term for a half-breed, red on the outside but white inside).

One summer, her parents decide that she needs to get to know her mother's family better and they send her out to the Turtle Mountain Indian Reservation in North Dakota.  Out there, she meets her relatives, learns more about her mother, and connects with her culture, changing her life forever.

A fairly predictable undertaking used as a vehicle to explore Ojibwe culture.  Despite that rather clumsy undertaking, this is a nuanced piece that occasionally lapses into an overly "teachy" (pedantic) style but has its heart in the right place.  The usual pitfalls of noble Indian or oddball life on the Rez are noth avoided.  Instead, it's a story with a lot to impart about the complexity of life for contemporary Native Americans.  I learned a lot through reading it.  At times, the story itself suffers from this grander purpose and loses its dramatic momentum, but it's not dull or dry.  Apple herself, who seems to have some traits of ADHD, is not always a likeable protagonist and seems overly quick to assume the worst of people, but ultimately is intelligent and insightful.  Her struggles to understand her family and their culture provide us with a sympathetic guide and help open up this fascinating culture.  A flawed but unique and valuable book.