Carry Me Home, by Janet Fox 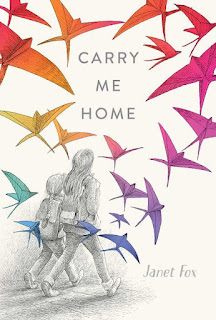 Lulu and her little sister Serena, along with their Dad, have been living in their car.  Dad is making money as a carpenter and promises to soon have enough so they can get a real home.  It's been fine so far as summer moves into fall and the girls start attending school, but the weather is getting colder.

And then one day her father doesn't come home.

He did this once before, back when they lived in Texas.  It was shortly after their mother died and he just got so sad that he had to go away.  It was a month before he returned, but the girls managed on their own.  And Lulu understands that it is best that way.  If people start to notice that your Daddy is missing, they call social services and the kids get taken away (and probably separated).  Lulu wants to avoid that at all costs. But as the days go by, keeping things together gets harder and harder and nosy adults begin to wonder where the girls' father is.  Twelve year-old Lulu is running out of ideas for how to prevent people from finding out.  And also running out of the means to keep her and her sister safe.

I've never been a fan of child abandonment stories or understood why so many of them get written.  The solution is obvious enough (adults find out and foster care turns out not to be as bad as the child imagined).  Dragging out that inevitable conclusion just seems like child abuse to me.

Setting aside that bias and preconception, this version of the story has some nice features to it.  Lula shows great resilience, taking care of her sister and even finding some time to have some fun.  I especially like the kindness of the people with whom Lulu deals  It's not just the expected kindness of the local librarian (which is sort of a requirement, no?) but lots of kind adults and kids as well.  Even a classmate who initially teases Lulu turns out to be a generous friend.  It must be something about Montana (where the action takes place)!  In any case, the positive, community spirit of the setting helps to buffer the traumatic nature of the material.  A happy ending helps as well.