Donuts and Other Proclamations of Love, by Jared Reck 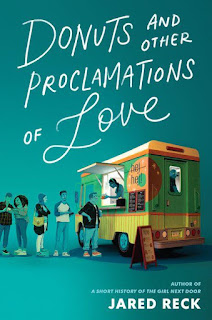 Oscar has no illusions of going to college.  The only classwork he really enjoys is cooking class and that's because it is what he does when he's not in school -- helping his grandfather run a food truck specializing in Finnish kebabs and Swedish donuts.  So, there really couldn't be a more opposite person at school than overachiever Lou.  She's taking all AP classes and set on being the valedictorian, and she's taken on a huge project for girl scouts that involves reducing landfill waste -- a project that involuntarily involves Oscar.  But as the two of them start working together, they find that Oscar's culinary skills and Lou's organization complement each other and that synergy spills over to the food cart.

While taking an out-of-the-blue left turn in the final fifty pages that disrupts the story, I really enjoyed this romantic comedy.  The strength of the story lays in its vivid characters.  Farfar (the grandfather) is a gem and adds a wonderful foil for a story that benefits from Reck's dry writing style.  Reck isn't a John Green, but he delivers a decent young male character who isn't (like most boys in male-written YA) obsessed with sex -- a feat worthy of supporting.  And while Lou is largely neglected, she gets enough development to make her an intriguing person in her own right.

The story takes a bit to really get going.  There is a wonderful back story involving Oscar's mother and  another about Farfar's former lover that truly were criminally overlooked, but I think Reck wanted to avoid long digressions.  Left as-is, the back stories provide depth without becoming integral to the story, but they do make the early pages a bit hard to follow as we are not quite sure at first where our focus as the readers should lay.  And the aforementioned late development to the story really serves to hijack where the author was leading us for most of the book.

I've never seen a story that mentioned the Aaland Islands before (and even Swedish-American stories are in short supply), so this book with its focus on Scandinavian street food will serve some multi-cultural value as well.