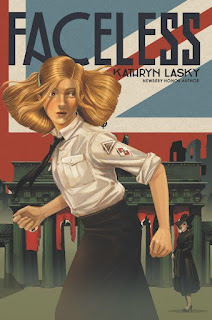 Alice is a spy for the British and a member of the "Rasas" (as in Tabula Rasa) -- a long line of spies who have a genetic mutation that gives them perfectly symmetrical faces that are incidentally impossible to remember.  This inscrutability gives them an advantage when working undercover.  Rasa also have superior intellects and can memorize facts easily and acquire languages flawlessly.  In all, Alice and her family make formidable spies.

In the waning days of World War II, Alice and her parents are sent to Berlin to help assist an attempt to murder Hitler.  Passing herself as Ute, a star student, she infiltrates Hitler's inner circle.  The plot (based on a real event) ultimately fails, but Alice gains firsthand knowledge of life in Hitler's bunker.  She also befriends a Jewish boy who is hiding from the Nazis and helps him survive.

Throughout her mission, Alice is distracted with worry about her older sister.  Just prior to leaving for Berlin, her sister retired from service and declined to join them in Germany.  Instead, she went to work as a codebreaker at Bletchley Park.  To her shock and amazement, Alice starts to catch glimpses of a young woman on streets of Berlin who looks like her sister.  Tracking that woman down reveals even further surprises.

The adventure is a bit too rushed to develop any strong feeling of suspense, but the story is rich with details that will be inspirational for further reading.  That strength can also prove to be a weakness when we get so bogged down in the details that there is not much room left over for story.

I was less taken with the subplot involving the Jewish boy and the mysterious sister.  The boy turns out to be largely inconsequential to the story and Alice's sympathy for him seems out of character and distracting.  It is also anachronistic -- glossing over the anti-Semitism of the period -- which is striking given the otherwise strong devotion to historical details.  The sister's story sticks out uncomfortably because it is neither well set-up in the beginning nor really effectively resolved at the end.  It also added little to the story.

The Rasa concept is a rich jumping off point for any number of adventures and one hopes that Lasky will take other points in history and give them the same treatment.