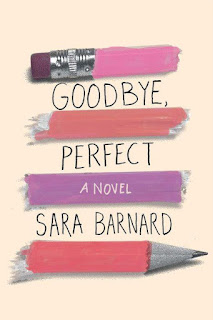 When Eden's best friend Bonnie disappears, Eden is as shocked as everyone else.  Sure, Bonnie had told her about this guy named Jack who she was mad over, but she was so vague on the details that Eden wondered if Jack was even real.  So, it comes as a surprise when to learn that Bonnie has run away with him and that Jack is actually their music teacher at school.

With parents and police pressuring Eden for information, she finds herself in an awkward position of trying to be supportive of her friend by lying to the police about whether she is in touch with Bonnie.  But the longer Bonnie is gone, the more Eden starts to question just how well she knows her friend.  How can Bonnie just leave her family and friends, throw away her life, and embrace a fugitive life with a man who is twice her age?

A engaging story with enough adventure to keep the plot moving with delivering a surprisingly poignant look at a friendship being torn apart as two childhood friends grow up.  Barnard is consistently strong at realistic portrayals of human relationships as seen in her other novels (e.g., Fragile Like Us, Destination Anywhere), respectfully capturing how children and adults really interact.  As in her other novels, our protagonist Eden is provided a deep backstory that gives the reader a true sense of what her relationship with Bonnie means to her, all of which adds to the pathos of the way Bonnie's runner really tears Eden apart.  And while minor characters can't possibly get as generous of a treatment, Barnard does take the time to fill in enough details that no one present is a throwaway -- parents get to have flaws without being caricatures, children are not always right, and so on.

It's a story that can't have a happy ending and it is not particularly inspirational subject matter, but Eden's journey to adulthood is emotionally satisfying as a story.  Highly recommended.