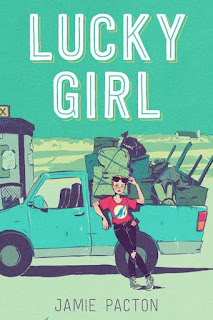 Considering the problems she has to deal with, Jane's real name (Fortuna) seems like a sad joke:  a dead father, a mother who hoards to cope with her grief, and a nasty ex-boyfriend.  But then she wins the lottery and the 58 million dollar grand jackpot.

Now, she has an even bigger problem:  How is she going to collect?  As a minor, she bought the ticket illegally and she can't just walk in and claim her prize.  If she hands it over to her Mom, her mother will just waste it all on junk.  The only person she knows who is over eighteen is her ex-boyfriend and THAT isn't going to happen!   While she tries to figure out what to do, she keeps quiet about it.  But her best friend Brandon is obsessed with identifying the winner and coming dangerously close to figuring it all out.

A comedic look at lottery madness.  In order to find a solution to her dilemma, Jane researches what prior lottery winners have done and uncovers the various ways that good fortune has generally turned bad.  The book thus is mostly a vehicle for exploring the sorts of crazy things that lottery winners do.  The ending, which relies on a rewriting of assumptions, felt a bit like a cop out, but the story itself is entertaining.  There are some potentially disturbing themes (death, mental illness, violence) but very little attention is drawn to any of these issues and the overall tone is light.