The Hollow Inside, by Brooke Lauren Davis 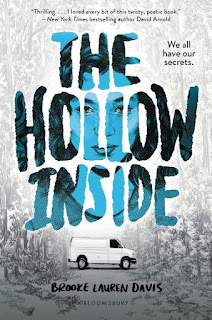 Phoenix and her mother have been on the run for a while, but that is about to come to an end.  Years ago, a horrible wrong was committed against Phoenix's Mom and the two of them have returned to Jasper Hollow to make things right.  Phoenix's job is to do reconnaissance, finding out everything she can about Ellis Bowman, celebrated author and self-help guru.  Without intending it, Phoenix befriends Ellis's son and finds herself brought into the family circle.  And while she is supposed to be gathering intelligence to help her mother's plans for revenge, her loyalties are tested as she gets to know Ellis's family and falls romantically for Ellis's daughter.

Through flashbacks, the details of Ellis's original betrayal (and the complicity of the people of Jasper Hollow) is revealed.  And yet, the more the reader learns about the wrongs that were done, the more everything grows murkier.  Good people did bad things.  And then they did worse things.  The past is being revisited, but events are still unfolding and there is still time for people to make more mistakes.  By the time the story ends, no one is going to get what they truly want.

The thing about tragedies is that they are not particularly fun to read.  Or rather, the "fun" of reading comes from the realization of the inevitability of the story: a well-written tragedy in other words writes itself, which what happens here.  Events unfold effortlessly and each new page fills the reader with dread -- the proverbial train wreck.  That Davis is able to exceed expectations and pile tragedies beyond my imagination (without creating a melodrama) is testament to a well-constructed story with sound foundations.  With that effort upfront, the author exploits vengeance and fate for maximum effect.

This is a story where every major character has a purpose.  Ellis is the guilt-ridden king.  His wife the long-suffering queen who knows all but remains steadfastly loyal.  Ellis's pastor tries to protect them both but not out of any loyalty; he has his own guilt to avoid. With the adults carrying heavy parts of the backstory, the dramatic weight of the current moment falls heavily on the kids.  The relationship between Phoenix and Ellis's daughter Melody is particularly central.  There's not much romantic heat between them, but as representatives of the two sides of this conflict, they are a junior version of the conflict between Ellis and Phoenix's Mom.  Well-developed characters, they have a nice spark between them that makes their romance just another layer of complexity in a story without much time for love.

A compelling tragedy with strong characters and an engaging narrative.  Dedicate the time to finish the last hundred pages in one sitting.