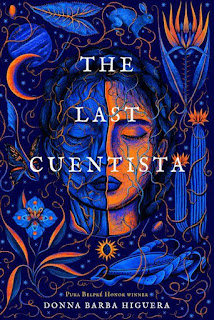 The Last Cuentista imagines a world in which there remains only one human being who can recall the stories, myths, and memories that make up human existence.  In doing so, it explores the importance of culture and the terrible cost of forgetting from where we have come.

Petra loves to tell cuentos and dreams of becoming a storyteller like her grandmother.  But destiny is about to seriously disrupt this innocent dream.  With the Earth about to be destroyed by a comet, a very small number of people have been chosen to board spaceships that will take them on a nearly-four-hundred-year journey to a distant hospitable planet in order to rebuild.  Petra's family are among the chosen ones.  They will sleep in suspended animation for the duration of the voyage, tended by monitors who will spend their lifetimes taking care of the ship, passing along their responsibilities to their children and grandchildren.  It will take many generations of these monitors until the ships reach their destination.

Years later, when the ships reach the end of their trip, Petra is awoken to discover that things have gone horribly wrong.  A totalitarian Collective has taken over the ship and enslaved everyone in the name of achieving a stifling consensus.  To maintain the control, the leaders use a combination of sedatives and ignorance.  Key among their policies is forgetting everything about the past and so they systematically erase the memories of the sleepers when they bring them out of hibernation.  No one can be allowed to remember how life was on Earth.  Instead, all thoughts must be focused on the Collective and its current mission.  For some reason, Petra proves resistant to attempts at wiping her memories and she sets about covertly to undermine the regime. Using her talents as a storyteller and her memories of Earth, she tries to enlist allies and save humanity.

Part Gabriel García Márquez and part Ben Bova (i.e., The Exiles Trilogy), Higuera creates a unique Hispanic-flavored science fiction story.  The narrative is uneven, with frequent flashbacks to Petra and her time on Earth jarring the narrative flow.  The overall depressing nature of the story (i.e., end of humanity) is not fully balanced with the optimistic message of Petra's cuentos and a very open endings leaves much of the dilemma unresolved.  Petra's stories (adapted from traditional folk tales) do not always align with the ongoing action.

As science fiction, then, the story does not always manage  to be a success, but the deeper message of the importance of oral history and culture as the root of what makes us human is powerful and quite moving.  Marketed to middle school readers, the serious themes and the upsetting nature of the material probably make it more appropriate for an older audience.