You & Me at the End of the World, by Brianna Bourne 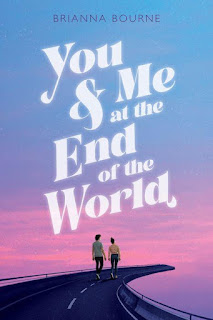 Hannah wakes up to find she's the only one left on Earth (that is, until she finds Leo!).  Everyone else has disappeared.  Now, it's just the two of them.  Houston Texas, population 2.

What would you do if you had the world to yourselves?  Neither Hannah nor Leo really know, but having the whole city to themselves, they are free to explore.  With an absence of any other human life, they also compare notes about their lives up to now.  The abandoned streets of Houston invite self-reflection.

Before this happened, they knew of each other, but definitely moved in different circles.  They are both seniors, about to embark on their real lives.  Hannah is on the verge of becoming a professional ballerina.  Leo, while a talented musician, seems destined to screw up his latest opportunity.  In an empty world, however, what future is there for a dancer and a guitarist?

An unusual story about what it would be like if all of the world's distractions were to disappear and you could really get to know another person.  I enjoyed the post-apocalyptic feel of an deserted Houston, but the implausibility of the scenario grated on me.  First of all, because there was little in the novel to give me a sense of place (Bourne made very little effort to bring up landmarks or invoke anything particularly Houstonian -- it may be a huge metropolis, but it definitely has plenty of local character!).  Secondly, because there is no way that a place would function very long if the entire living population suddenly disappeared.

As the story progresses, rather than address the implausibilities, Bourne stresses her protagonist's inner turmoil and pulls the characters into an emotional breakdown.  The story gets bogged down in insignificant chat.  The story's eventual resolution is a complete let down, especially given the potential of the premise.  It is all worsened by meaningless side trips (out to grandmother's house and later to a house party) that seem designed mostly to fill pages than to develop characters or move the story along.  Disappointing.