A Sisterhood of Secret Ambitions, by Sheena Boekweg 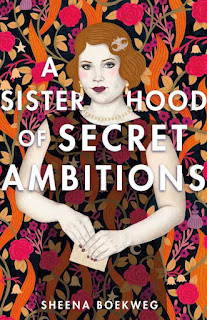 "...throughout history, anonymous has been a woman."

In this alt-history, Abigail Adams's threat to her husband to pay attention to the women bears fruit in the formation of a shadow organization of women, called the Society.  Throughout American history, it has indirectly held on the reins of power through the manipulation of  husbands. Broken into castes, Matrons rule, Spinsters fight, and Gossips maintain surveillance.  Young men are noted and earmarked for success by the Gossips and promising young women -- pledged to be loyal to the Society -- vie for the affections of these men so they can be positioned to control them when their husbands rise to power.  Never in the spotlight, these women know that the only way they can hold power is to pull the strings in secret.  The world would never tolerate a woman in charge.

It's 1926 and 17-year-old Elsie is one of a set of girl who have Andrew Shaw in their sights.  With help from their Society sisters, they try to win his heart.  Ellie wants to make a difference in the world and marrying the man most likely to become president is the way to do it.  But Ellie's heart is not really into the hunt.  Her older brother, supported by the Society through his well-place spouse, is making a name for himself.  Ellie wonders why she can't do so as well in her own name.  Andrew Shaw, while his heart seems to be in the right place, is nice enough but Elsie doesn't really fancy him.  She prefers the brooding and dangerous Patch, a young man with a revolutionary agenda.  And when his plans lead to tragedy, Elsie is forced to decide whether to pursue her plan of gaining power by becoming Mrs. Andrew Shaw or whether to follow her own dreams.

A striking and original story that explores a variety of contemporary feminist topics in an easily digestible format.  Don't let the highly retrograde-sounding premise and the historical setting fool you into thinking this is just some young women wearing fabulous gowns and throwing themselves at a guy (although there are fabulous gowns and a guy).  This is really a much deeper discourse about what it means to be a feminist in contemporary times. Race, class, sexual orientation, body positivity, and gender identity all take a turn making an appearance (in this alt-history, folks are surprisingly worried about equality and economic injustice).  But it is really the oldest issue of all -- agency -- that takes center stage.  All the more so because of the inherent contradictions that are present in the premise of women seeking power through marriage and children.

This is a book which I would truly love to hear young people discuss.  As a member of the previous generation of feminists, some of the arguments here are unfamiliar or strange to me, but I know I would learn a lot by hearing the next generation tackle them.  And the book is full of quotable passages (like the one above) that act more as landmines than hidden gems.

Nothing is perfect.  I found Ellie's growth as a character unsatisfying and the fluidity of the story gets sacrificed for the more ideological aims of the novel.  However, this is a very thoughtful book which has used the alt-history rubric in the best possible way: to facilitate deeper thought and discussion about feminine ambition in contemporary society.  A memorable read.