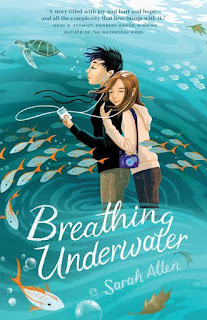 Living with an older sister who has been freshly diagnosed with severe depression is challenging for Olivia.  And while she knows that Ruth is really sick, she wishes that her sister would not give up.  On a cross-country roadtrip with family friends, Olivia hopes to have a break through with her sister.

Three years ago, before the family moved from California to Tennessee, the two sisters buried a time capsule on the beach.  Now, they are heading in an RV back to California.  Maybe if Olivia can remind her sister of the good days they used to have -- topped off by digging up that time capsule -- she can fix her sister.  But as the trip progresses, Olivia's efforts are largely in vain and she has to confront the truth that her sister's problems are out of her control.  And that issues that are bugging her are really problems that lie within.

A short and sensitive look at the challenges of having a loved one struggle with clinical depression.  The novel is wonderful as far as it goes, but it is basically a one-note story.  There's not much to say that isn't stated outright in the first fifty pages.  A final climactic blowout attempts to break through to new ground, but the subject matter doesn't realistically lead to a breakthrough.  Well-written, but with no particular place to go with the story, it's a bit of a disappointment.