Catch the Light, by Kate Sweeney 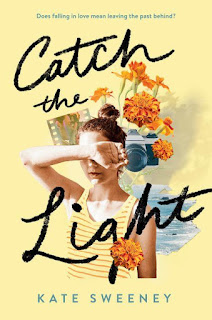 For a family dealing with grief, a move across country could be a new beginning or running away, or maybe a little of both.  Nine months ago, Mary's father passed away and now Mom has decided to move Mary and her younger sister from Los Angeles to upstate New York.  For Mary, it is the start of her last year of high school -- time for thinking of moving on anyway -- but she finds herself mired in grief and depression.  Unable to complete her college applications, lost in her new home, and burdened by her inability to heal her mother or help her sister cope, Mary feels like she is under water.  She is blessed by a good new friend and a potential romantic interest (with whom she shares a love of old fashioned film photography), but she feels trapped between her past life back in California and the unwelcome sense that her new home in New York actually feels more real to her.  Through it all, she is terrified that her memory of her father is slipping away.

While built on a common YA theme (why are there so many dead parents in YA books anyway?!), Sweeney's treatment is actually pretty stand-out.  That's hard to explain as everything from the sassy younger sibling to the petty misunderstandings to the inability to tell the truth are pretty much canon.  But Sweeney's writing is nuanced and while situations feel very familiar, one also feels like we actually understand where Mary's behavior is coming from.  In other words, this isn't paralysis for the sake of filling pages, but a story really being told.  I never felt manipulated and I wasn't having my heart strings pulled at gratuitously.  In fact, this isn't a story in the end that packs a huge emotional punch, but instead tells a story well about imperfect people who are trying to sort things out.  Mistakes are made all round, feelings of hurt are aired, compassion is shown, and realistic forgiveness and healing develop.

Off-tangent rant:  Like the mix tape, analog photography really has no place in contemporary literature.  Yes, I get that dark rooms are excellent places for intimate feelings to be explored (they certainly were in the 1980s when I was a teenager!) and I see how much fun it is to use the chemical process of film development as a metaphor for emotional change.  But really?!  Digital photography has long supplanted the whole business.  More to the point, a creative writer could probe the complexities of LightRoom and the amazing potentials in digital aesthetics and break some new ground.