Clues to the Universe, by Christina Li 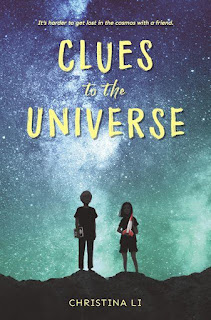 Ro and Benji are complete opposites.  Ro is organized and methodical -- the type of person who excels at science.  She has a mission.  Before he died, she and her father were building a rocket together and now she is determined to finish the project and win the science fair.  Benji, on the other hand, is a dreamer.  He'd rather focus on his drawing and comic books.  He suspects that his absent father is actually the creative force behind his favorite comics series but doesn't know how to find out for certain.  More immediately, his Mom has warned him that, if he doesn't pull up his science grades, she's going to pull him out of art class.

When Ro and Benji are paired up as science partners, they both have strong motivations to do well, even if their approaches are different.  They make a deal:  Benji will assist Ro in her rocket experiment and Ro will help Benji find his father (a not-so-insignificant task in the pre-Internet setting of the story).  Significant set backs along the way present challenges that they have to overcome.  And an act of betrayal triggers a chain of events that force them to reconsider their priorities.

A predictable and safe story of friendships formed and challenged -- standard middle grade stuff.  The vaguely 1980s or early 1990s setting may confuse readers as only the absence of computers and cell phones provide clues to the era.  Bullying, divorce, and grief are all raised as issues, but not really dealt with in any depth.  The story ends on a set of super happy notes.  It's a fine read, but not overly memorable.