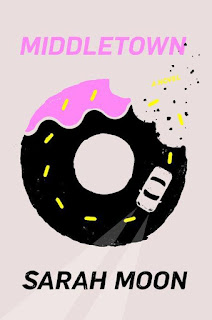 Eli and her older sister have their differences but they have allied over having to deal with their erratic and alcoholic mother.  However, when Mom gets sent away to three months of mandatory rehab, they struggle to keep things together.  Anna manages to impersonate a long-lost aunt and become Eli's court-appointed guardian, but the girls still have to figure out a way to feed themselves and pay the rent.  When inevitably things start to collapse, the girls run away and seek out long-forgotten family connections.  In doing so, they learn a lot of family secrets and a bit about the strength of family ties.

While not so original as a story, Moon's quirky novel is full of original and memorable characters.  The girls' (real) Aunt Lisa steals the show with her feisty and world weary outlook, but I also enjoyed the tentative romance between Eli and her best friend Meena.  The exploration of alcoholism and the way it tears families apart is a great topic but is never fully developed -- which would be my overall criticism of the book (that manages to never really take things as far as they could have gone).