The Beatryce Prophecy, by Kate DiCamillo (ill by Sophie Blackall) 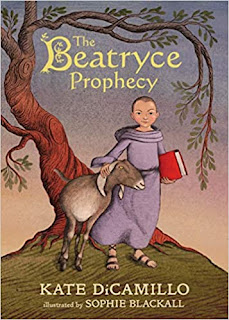 Everyone at the monastery is afraid of Answelica the goat.  She's mean and angry and bites.  So, the monks are surprised one day when they find a girl sleeping with Answelica.  The girl is an unknown stranger who can remember only one thing about herself:  her name is Beatryce.  But from the very start, she is exceptional.  The girl can read and write, which is forbidden for commoners and women overall.  She is fearless and brave and stubbornly determined to confront the king for reasons she does not yet fully understand.

But Brother Edik has an idea of what is going on:  there is a prophecy that declares "that one day there will come a child who will unseat a king.  The prophecy states that this child will be a girl.  Because of this, the prophecy has long been ignored." And while the prophecy is often disregarded, no one is ignoring it now.  The king's men are hot on Beatryce's tail and it falls upon Brother Edik to convince her to hide.  But being stubborn, Beatryce instead befriends a local boy (Jack Dory) and a former king (Cannoc) and reveals herself to the king in order to fulfill her destiny.  Along the way, she drafts a fairy tale of her own that eventually supplants the prophecy of the main story in a very meta literary moment.

DiCamillo falls into extremes.  She is undeniably a great writer and full of original and clever ideas that challenge and disrupt typical formulae and tropes.  Sometimes this works fantastically (Because of Winn-Dixie, Flora and Ulysses) but other times the story flies so far off the rails that only adults can really enjoy it (The Tale of Despereaux).  Here, it's more the latter.  The story and its many layers is clever but I can't imagine children being able to keep up with it.  It sounds like a children's fairy tale, but is too knowing and subtle.  It's self-destructive narrative is far too aware of its own cleverness.

That said, it is a very pretty book, with beautiful illustrations (both full plates and marginalia) by Sophie Blackall.  The layout and presentation is truly gorgeous and Blackall probably deserves a third Caldecott for this book.  The design perfectly complements the text and makes for a handsome overall package. Aware that this is a truly outstanding work, there's even an upgraded "collector's edition" of the book featuring more of all of this, which I would be very tempted to own if it weren't for the hefty price tag and my lukewarm feelings for the story.

I can't see my students picking this one up without a lot of prompting. I bought Gidwitz's similar The Inquisitor's Tale against my better judgement, and no one has checked it out.