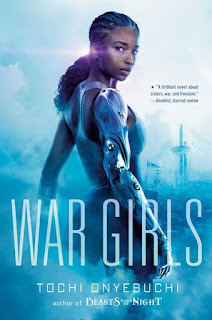 A dystopian YA for readers of The Economist.  The story in brief: take the Biafran conflict (a civil war that took place in Nigeria in the 1960s) and project it forward two hundred years.  Add nanotechnology, cybernetics, and man/machine robots taken from Mobile Suit Gundam.  Mix in child soldiers, ethnic cleansing, and climate change.  When nearly done, generously garnish with a complicated sibling-like relationship between two really tough protagonists.

Onyii and Ify look out for each other in the War Girls camp, a rebel base of girls hidden in the jungles of Biafra, near the irradiated and uninhabitable Middle Belt.  Onyii has developed a reputation as the "Demon of Biafra" with numerous kills while operating her mech against the Nigerians.  Ify's talents are quieter -- an ability to hack into any computer system and to synthesize limitless data.  When a surprise attack from the Nigerians knocks out their camp, the girls are separated.  Ify is taken by the Nigerians back to Abuja.  Onyii is "rescued" by the regular Biafran army which fails to see any value in a force made up of young girls.

While both girls manage to survive, their attempts to reunite are thwarted.  At least part of the problem is that they are both being exploited, albeit in different ways.  Onyii's ferocious anger and her surreal fighting skills are an asset to the Biafra military while Ify finds herself a pawn being passed back and forth between the sides.  An armistice, brokered by the developed nations (who have all fled to outer space as Earth itself has become largely uninhabitable) brings into stark contrast just how disposable child soldiers are in peacetime.  Without a war to fight, the girls have to come to terms with the horrible things they have done to others (and the ways they have even betrayed each other).

A strikingly original vision by a brilliant Nigerian writer.  For those who don't have a working knowledge of Nigerian history and/or African politics (i.e., most of the readers who will pick up this book), I strongly recommend starting at the back of the book and reading the author's historical notes.  Nigeria is an interesting nation-state and Onyebuchi is following a fine tradition of self-reflection in Nigerian literature.

I was most struck by the armistice.  The author's observations about rehabilitating child soldiers and the anecdotes in the novel are heartbreaking.  His damning critique of foreign aid and truth and reconciliation tribunals are incisive.  As one character observes, when most people see a African, they don't really see a person.  Our understanding of Africa is full of oversimplified analysis and indignation.  This novel goes some ways towards trying to explain the cause of conflict from a grassroots perspective.

Personally, I found the extreme amount of violence to be numbing and cumulatively boring.  Every few pages, we are subjected to a blow by blow description of woman and machine conflict where bones break, blood spills, and limbs decapitate.  Each encounter seems terminal, but thanks to the superior bioengineering of the future, the characters are ready to jump back into action a few pages later.  As the violence never seems to have consequences, it becomes less and less interesting.  I eventually just started flipping past the battle scenes to get to the parts that interested me more.  That those scenes were worth flipping to will give you an idea of how compelling I found this book.