A Quiet Kind of Thunder, by Sara Barnard 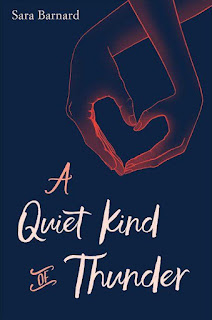 Steffi suffers from anxiety-induced mutism.  In front of strangers or presented with stressful situations, she is unable to speak.  The harder she tries to overcome it, the worse she gets.  Her parents are concerned that she will be unable to handle independent living.  So, while she is convinced that she'll go to university after graduating, they worried that she won't be able to handle it.

Rhys is a new enrollee at school.  He's deaf.  The headmaster, aware that Steffi knows some British Sign Language (BSL) (which she picked up as a therapy for her mutism), asks her to orient Rhys and help him get acquainted with their school.  Despite the difference in their handicaps, they bond and become friends.  And the friendship morphs into a romance.

The relationship is far from smooth.  While both of them confidently believe they understand each other's challenges, they quickly learn how rudimentary their knowledge truly is.  And the petty misunderstandings that accompany any relationship become a bigger deal when dealing with such significant communication barriers.  With all of this added on to the whirlwind of a first romance for the two of them and it is not smooth sailing.  Things come to a head when the young couple slips away from London to spend a secret weekend in Edinburgh and an accident puts their physical limits to the test.

Sara Barnard continues to astonish me.  She writes books with modest premises that seem to blossom into these amazingly complex and significant observations.  On its face, the story is nothing spectacular or now.  What makes this book (and all of her other novels) stand out is her consistent strong character development.  Her characters are complex and defy stereotypes.  Motivations are nuanced.  Young protagonists have age-appropriate and realistic responses to their environment, being capable of both drama and intellect.  Adults are flawed but mature and responsible.  They understand their children and support them (even if they don't always do what the children want).  In sum, the characters feel like real people.

Steffi and Rhys have different challenges in growing up with their distinct disabilities, which are portrayed well, but Barnard also manages to show us similarities.  Both of them bear an adolescents' misunderstanding of responsibility and expectations (Steffi lacks confidence while Rhys is unrealistic about expectations). Both have trouble with trust, although Steffi's issues are rooted in bullying while Rhys's come from microaggressions.  Both of them are sensitive and aware of the way the world discriminates against them because of their disabilities although Steffi tolerates it better than Rhys does.  The fact that I can observe these subtle differences between their characters gives some sense of the nuance in the character development.

The novel is imperfect.  The story is laden down with a number of subplots (a dead stepbrother, a mother's anxiety, etc.) that are never properly addressed and Steffi's codependent friendship with her BFF Tem is imperfectly resolved.  Shedding the former might have provided an opportunity to better address the latter.  The overall beauty of the book, though, is its simplicity.  Getting to know these two young people -- in their flaws and glories - made me fall in love with them and their story.  It's just a boy-meets-girl romance, but with the character-driven approach of the narrative, they become people I truly cared about.  So I wanted to be there with them as they worked through their problems and to be able to cheer for them as they figured things out.

In sum, a modest story that proved to be a good read from a consistently excellent writer.