Clarice the Brave, by Lisa McMann 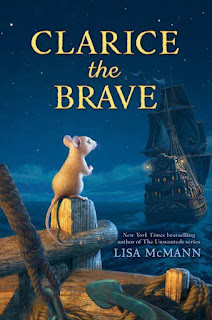 Clarice is just a little ship mouse.  Since her mother was washed out to sea, she's looked after her intelligent (but largely impractical) brother Charles Sebastian.  For the most part, this has involved avoiding notice from the humans, keeping away from the chickens, and trying not to get eaten by the cats.  It's a simple life with easy rules to follow (even though Charles Sebastian seems to still struggle).

Humans are far more complicated.  When the crew rise up in a mutiny, the captain and his supporters are set adrift in a small boat.  Clarice finds herself on the small boat, while Charles Sebastian is left behind on the ship.  Separated by leagues of open sea, Clarice is distraught and determined to find a way to reunite with her weaker brother.

What can a little mouse do?  With no one else to turn to, Clarice cleverly befriends Special Lady, the captain's cat.  Faced with a mutual need for each other's support in order to survive, Clarice and Special Lady form an unusual alliance.

An action-packed story of adventure and friendship.  I was nonetheless disappointed with the book.  Honestly, based on the cover and a cute blurb, I was hoping for a gentle animal story (i.e., Stuart Little-esque adventures on the high seas) but this story is too gory for that.  There's an awful lot of death (often by unpleasant means) and it's not a very cheery story.  It's also a surprisingly morally ambiguous story without any clear heroes and an ambivalent ending.