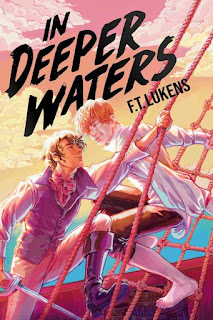 Having come of age, Prince Tal is now on his traditional coming out tour of the kingdom.  Few of his subjects know him because he has been hidden from view.  His family is supportive and highly protective, so his cloistering is not the result of shame, but of wariness.  His great grandfather was an evil and terrible mage who terrorized the kingdoms and sowed discord.  After his defeat. the royal family has had to work hard to recover any honor among their peers.  So the fact that Tal shows signs of possessing the same magic now is dangerous.  If the other kingdoms find out about Tal's powers, he and the entire family will be in danger form proactive attacks.  It is in this awkward and dangerous position that Tal must operate; remaining cautious about revealing his true self.

But Tal's plans to keep a low profile are thrown asunder when he rescues a mysterious boy named Athlen from a group of pirates.  The two young men form an immediate attachment in spite of knowing so little about each other's secrets.  And when Tal himself is kidnapped, it is Athlen who must rescue him and help him save his kingdom.  And along the way Tal must also deal with how to come out publicly as a mage.

Swashbuckling sea adventures in a fantasy world, but the book lacks much of the urgency of a good adventure.  The fantasy setting itself is also largely underdeveloped.  So what does the story have?  Lots and lots of exposition and discussion.  This is a story where the characters talk and talk and talk some more, so that by the time anything actually happens, we've pretty much hashed through it from all of the angles.

Homoerotic elements are present but largely played down, much to the detriment of the story as the potentially hot romance between Tal and Athlen never quite takes off.  In their world, homosexuality is a non-issue, so it is the side plot about Tal gaining the self-confidence to come out as a holder of magic is a cute way of writing in a coming out story.  All of which brings us to the crux of the matter:  the story has cuteness and potential, but it never delivers on its promise.