Kate in Waiting, by Becky Albertalli 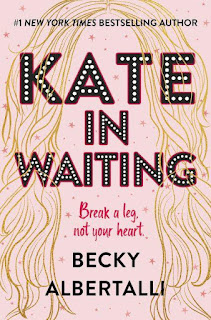 Kate and Anderson have been friends for ages.  One of the best parts of having a gay friend is their ability to crush on the same guys as you do.  And as long as the objects of their longing are distant and far way, there's no harm or foul.  But when their shared summer crush Matthew enrolls at their high school in the Fall, suddenly it's a different story.  As much as Kate and Anderson realize that it would be best for their friendship if they both swore off Matthew, they realize that neither of them want to.  Instead, they agree that they will each be free to pursue Matthew and that they promise to have no hard feelings if they lose out.  Will their friendship survive this?

The novel is an extremely brisk read that I found nonetheless challenging to get into.  Albertalli drives the action forward almost exclusively through dialogue which sounds simple until you try to read it.  Exposition and reflection take a back seat to a rather relentless drive forward as one interaction leads to another.  Blink and you'll miss an important plot point.  You certainly never get bored, but you stand a good chance of getting left behind.  Admittedly, this is a pretty good depiction of the whirlwind of adolescent relationships, but in written form it makes it hard to invest in the characters.

The book's heavy use of the F-word is unnecessary and distracting, adding little to the story except to become numbing.  It probably also draw unnecessary attention to the book for people looking for excuses to keep it out of young readers' hands.

Otherwise this is a pretty much by-the-numbers dramarama adventure (i.e., kids put on a theatrical production -- Once Upon A Mattress in this case).  The eventual resolution of  Kate and Anderson's romantic lives and their friendship with each other is largely uneventful and unsurprising.