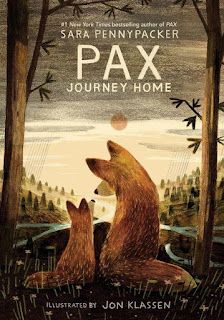 In this sequel to the pacifist allegory Pax, years have passed and both boy and fox have grown.  The war which raged through the first book has ended and humans are rebuilding, focusing on cleaning away the ecological damage of warfare.  Restless and uncomfortable at home because of the memories the place stirs up, he joins up with the "Water Warriors" -- a group of young people restoring the lakes and rivers in his old stomping grounds.  Just as the water ways need to be cleansed of toxins left by the war, Peter also struggles under his feelings of loss and anger from the hostilities and the more recent loss of his father. Back in the woods, his memories of his former pet Pax dominate his brain and he yearns to see the fox again.

Pax, meanwhile has grown up and built a family.  Safe from war but now threatened by the return of the humans, he goes out in search of safer spaces to raise his young family.  While intending to leave his three kits with their mother, his stubborn daughter tags along and  Pax is forced to bring her along.  Pax introduces her to the forest and to the ways of the humans.  He tries to explain to her that some humans (like his Peter) can be kind.  The eventual reunion with Peter is marred by his kit falling ill and Pax must make a fateful decision to trust Peter to take care of the young one.

The original Pax always seemed a bit too complex to be a children's book -- its style too moody and its story difficult to follow.  The sequel is even more so.  This is partly due to the heavy reliance on actions and characters from the predecessor (I would strongly recommend reading or re-reading Pax before reading this book).  However, even standalone, the novel's primary themes of environmental devastation, suicidal ideation, and grief are more personal and much darker.

I really appreciated the karmic circularity of this story, allowing the themes of the first book to come back around and the arc to achieve pleasing closure, but this is overall a weaker story.