Sway With Me, by Syed M. Masood 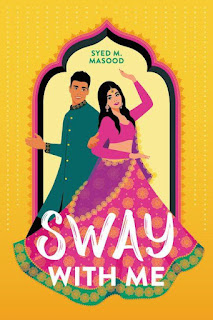 Arsalan has been raised and homeschooled by his great grandfather Nana.  Since his mother died in a car accident a few years ago, it's just been the two of them (his abusive father abandoned them long before). Now Nana has decided that it is time for Arsalan to attend public school. Nana's tutelage, heavy on literature and neglectful of math or science, has left Arsalan's education unbalanced and his social skills non-existent.

Recognizing his weakness, Arsalan turns to the daughter of a prominent matchmaker in his class named Beanish, in hopes that she can find him a girlfriend.  Beanish has a request of her own:  she needs a partner for an upcoming dance contest.  Arsalan knows nothing about dance, but he'll do whatever it takes to get her help with his problem. She in turn solicits the help of Diamond, a stylish and athletic boy who helps Arsalan bulk up for his role.

The situation (and Diamond in particular, with his habit of referring to himself in the third person) is comedic and overall there is a rom-com element to this story, but it has several serious themes as well.  Beanish's dance is not actually for a contest but for a more important purpose:  saving her sister from an unwanted marriage.  And Arsalan is not just socially awkward, but also a survivor of horrific childhood abuse.  Masood's writing beautifully balances out the light and the heavy, often at the same time, as in this passage which so crushingly depicts Arsalan's association of love and abuse:

Before I could respond, her lips -- accidentally I am sure -- grazed the crook of my neck. Their touch was soft and impossibly delicate against the spot where my father had once pressed a match and threatened to burn me.

And it's not just Masood's sensitivity to complex emotional states that makes this story shine.  Culture and religion feature prominently and treated with some sophistication.  Some of the pious (the intended groom of Beanish's older sister and Arsalan's father) are negative, but Diamond (for all of his vanity) is a positive role model for religion.  Nana's skepticism (rooted in intellectual pursuits) contrasts with Beanish's instinctual rebelliousness.  Arsalan stands between them all, full of doubt, picking out his own understanding of faith.

Not everything worked for me.  I thought the father's abuse was over the top and not really sure it was necessary for it to be so, but overall this is a beautiful story.  Masood is such an original writer and the characters so vibrant and interesting that I can't help but recommend the book.  This is a joyous book about friendship, adopted family, and loyalty.  While rooted in Pakistani-American experience, there is nothing particularly exclusive about the story.