The Mirror Season, by Anne-Marie McLemore 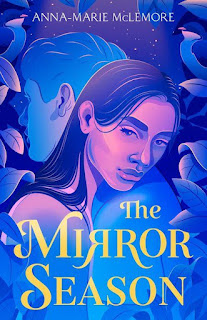 Ciela has inherited her great grandmother's talent for intuiting what pastry someone at her family's pasteleria would most enjoy.  It's a talent that's made her famous with the customers as La Bruja de los Pasteles, but after a traumatic incident at a school party, she's loses her touch.  Now, her world is full of leaves that turn into dangerous shards of silvery mirror and trees that mysteriously disappear in the night.

At that party, she was assaulted, but she was not alone.  A boy, who she barely knew, was raped nearby at the same time she was.  Afterwards, she took him to the hospital but fled the scene to avoid having to explain what happened.  Months after the incident, at the start of the school year, she is surprised to run into the boy again, newly enrolled at her school.  He was so drugged at the time of the assault that he doesn't recognize her now.  She could easily turn away and ignore him, but those shards of silver mirrors she sees everywhere tear at her and drive her to protect him.  She knows she could come forward and fill in the blanks in his life, the things he can't remember from that night, but telling him means also confronting what happened to her ... and what role she played in what happened to him.

An emotionally intense trip through the experience of rape and its emotional aftershocks, buffered somewhat by magical realist imagery inspired by Hans Christian Andersen's Snow Queen (and probably Like Water for Chocolate). It's definitely not for the faint of heart, but this exceptionally honest and raw portrayal shares much about the experience.  The focus is not so much about healing as it is about understanding the experience and processing it.  Ciela is not always honest about what happened and it takes several shocking iterations for the full story to emerge.

McLemore writes beautifully.  Whether it is describing Ciela's talent as "the part of me that speaks the language of flour and sugar" or the many ways she describes her grief (e.g., "All of me has poured out, like the middle of a pinata cake") this is gorgeous writing.  She also takes considerable risks to create strong and unexpected scenes.  A romantic and sensuous interlude, stunning for its incongruity and yet defiant appropriateness, is a notable highlight -- beauty in the midst of horrible cruelty and suffering.

I have something of a soft spot for magical realism. The imagery of baking and trees (both in their leaves turning to mirrors and their mysterious disappearance) are used in multiple and powerful ways.  Of the too, I generally found the food references less intrusive than the mirrors (which I never quite fully understood -- hidden guilt?  anger?).  Ciela's ethnicity, sexual orientation, and class come up frequently, but are largely peripheral to the overriding theme which is about recapturing a sense of self in the wake of a violation.

I know that many people avoid stories about sexual violence like the plague and that for some this is because of how triggering the experience of reading about it can be.  However, this is a book -- as the afterward makes clear -- written by a survivor with the aim of giving an honest survivor's voice to the experience.  It is an insightful voice, a proud voice, and one that ultimately refuses to be silenced.  This is a book worth reading.