With You All the Way, by Cynthia Hand 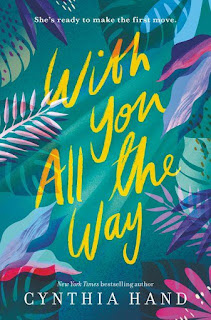 The family trip to Hawaii (ostensibly for her mother's professional conference) has been something that Ada and her sisters have been looking forward to.  And with the way things have been going wrong lately, Ada can certainly use a break!  Just before the trip, Ada finds out her boyfriend is cheating on her because she wouldn't have sex with him.  Her older sister Afton has had a falling out with her boyfriend as well.  And then they find out that their stepfather isn't going to be joining them, which makes no sense until Ada catches her mother having an affair with a colleague on their first day of vacation.

Given that Ada's problems seem to come back to her fear of sex (something which doesn't seem to bother anyone else!) she decides that it is high time she did something about it during the vacation.  There aren't a lot of young people her age at the conference except for geeky Nick, whom Ada would never have given much thought to, but who's available (and willing).  Awkwardly, the two of them plan out how it will happen.

While following in the proud steps of Judy Blume's Forever, this is a generation removed and then some!  It's a very plain and explicit discussion of sex, whether it's Ada's fears of it, her desire to have it, and her preparations with Nick. As many YA books as I read, you would think I've become unfazed by sexually explicit stories, but the directness of this book often made me uncomfortably aware that I'm a middle-aged guy reading about an underaged woman's intimate sexual feelings.  My gut tells me that Hand gets the tone right.  Ada is a perfect product of modern sex education, a target of the mass media sex, and the eternal ignorance of an adolescent on matters sexual -- it's all as painfully awkward as you can imagine it could be.  I certainly was not like this as a teenager, but modern kids have much more information at their fingertips, even if they are no more emotionally mature than we were.

Infidelity, which comes up in at least three distinct cases in the story, is another theme.  It doesn't seem to serve much purpose except to link together mother, sister, and Ada, but I did not see where it was going.

I really liked the sister dynamic.  Ada plays the usual middle child and performs admirably sorting out her older sister's recklessness while protecting her little sister from all the shenanigans.  Little sister also provides comic relief throughout.

It's a nice story but aside from providing a really drawn-out sexual encounter (and a week of planning leading up to it), I'm not sure that the book delivers much value.  In sum, a book that people can read for its scandalously frank discussion of teen sex while enjoying a largely functional story with some sweet sisterly bonding.  However, if teens having frank conversations about mature topics and engaging in activities that they aren't quite ready for makes you uncomfortable, this is not a good book for you.

I do wonder how many young readers would actually enjoy reading this?  Would they find a heroine to whom they could relate or would they feel that the author was being condescending?