A Rush of Wings, by Laura E. Weymouth 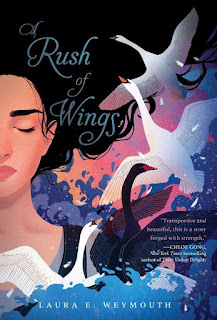 For this retelling of The Grimms Brothers' Six Swans, the setting has been transported to Scotland, throwing in a bit of Highland bravado into a story of breaking curses.
Rowenna was always supposed to learn the Craft from her mother, but Mom never felt she was ready.  And when a demon from the sea visits them and kills Mom in front of Rowenna, there is nothing she can do to prevent it.  Rowenna never learned enough about her powers to do anything.  And now that her mother is gone, Rowenna probably never will.

A few months later, Rowenna's mother returns to them and only Rowenna can tell that it is in fact the demon, now masquerading in her mother's form.  When Rowenna tries to stop the demon, it curses her with muteness and transforms her brothers into swans.  Turning the villagers against them, her mother forces Rowenna and her swans to flee for their lives.

To break the curse, Rowenna must knit a shirt made of nettles for each of her brothers.  To do that, Rowenna needs to lay low and avoid attracting attention.  But Scotland is seething under English occupation and Rowenna and the swans attract attention:  Torr, the English tyrant who leads the occupation, becomes obsessed with the powers that he believes Rowenna has and what they could do to enhance his own power.  And Rowenna, forced by him to develop those powers, is learning their true extant.

It's very hard to read this book and not compare it with Elizabeth Lim's Six Crimson Cranes, which also adapted the same fairy tale.  Weymouth's take is prettier, grounded in a more realistic setting, and more literarily ambitious, but Lim's novel is much easier to read and track.  Weymouth's proses drifts and wanders and it is frequently hard to follow the action.  It was probably mostly due to my recent familiarity with the story (from reading Lim first) that even made it possible for me to follow this version at all.  And for all the talk about highlanders and the occasional "aye" or "lassie," there is surprisingly little of Scotland here so even the advantage of the setting is largely wasted.  Where Weymouth's does do a better job is in showing Rowenna's character growth and her ability to navigate her conflict with her mother.  This is mostly due to Weymouth's more philosophical and cerebral take on the story, which Lim primarily treated as a swords-and-sorcery tale.