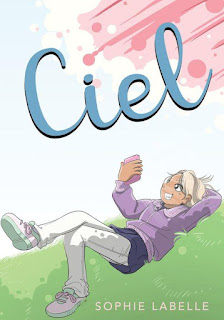 Ciel is starting high school this year.  They have always had a complicated identity, being non-binary, but in middle school people knew Ciel and had gotten used to them.  With a new school, there's  new people, and getting them and the teachers to refer to Ciel properly is trying. Stephie, Ciel's best friend, takes a different approach:  avoiding her trans status altogether and simply passing as a girl in school.

Added to these questions of identity are Ciel's issues with maintaining the relationship they have with a boyfriend who has become more and more distant since he returned home to Iceland.  Keeping a transoceanic relationship going is hard and Ciel isn't even sure they want to keep trying:  there's a new trans boy in their sights!

Aside from the fact that the story is largely bereft of cisgendered  main characters, the book is surprisingly sparse.  So its appeal lies in the novelty of the characters.  The key plotlines (Ciel's relationship with the Icelander, their vlog and some negative reactions to it, Stephie's embrace of her feminine identity, and Ciel's conflicted relationship with gender overall) are present as ideas but not really developed.  It's busy, but doesn't really go anywhere.